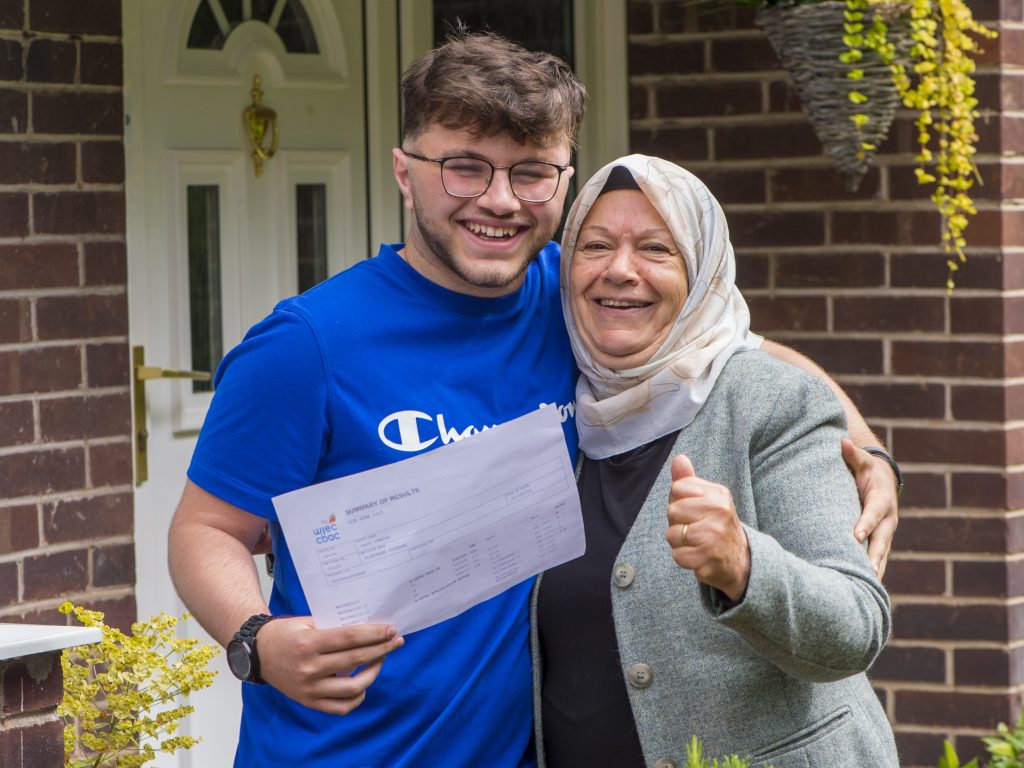 Buraq Ahmed, who left his parents in Iraq to travel to the UK with his grandmother to be treated for congenital hip dysplasia, has gone against the odds and achieved a place at Fitzwilliam College, Cambridge to study Medicine having achieved A* in Biology, A* in Chemistry, A* in Economics and A* in Maths in his A Level results announced today.

Leaving his parents who sold their home to finance the trip in order for Buraq to access medical services in the UK Buraq, who was only three years old at the time, didn’t physically meet his family again for 10 years.  Since then he has undergone nine surgeries and is on daily medication to manage extreme pain.  A right hip replacement operation last August made a significant difference and Buraq is now waiting a left hip replacement which is currently on hold due to Covid19.

“Neither my grandmother or myself spoke English when we arrived in the UK and there were many days when I was unable to move” said Buraq.  “Initially we were only coming to the UK for a limited time however the Iraq War and ICIS terrorism attacks meant we couldn’t go back.  As a child you don’t realise the trauma you and your family are going through and I was fortunate that my grandmother was always there for me.  My aunt and uncle also subsequently moved to Cardiff and, as my grandmother was getting older by this time, we moved in with them and my young cousins.  As I have got older, I have realised what a worrying time it must have been for my parents and my three younger brothers who were born after I left Iraq and now live in Belgium.”

Buraq who attended comprehensive school in Cardiff, was also a keen footballer and was chosen to play for Cardiff Academy.  However, as his condition worsened, his physical movement became increasingly limited and he was unable to play.

“I was falling behind” said Buraq “and realised I needed to focus on my studies more so I really engaged with my teachers and managed to get really good marks at GCSE.  Having spent so much time in hospitals with some of my happiest times being looked after by amazing NHS nurses I decided that I wanted to help other people who were suffering.  I also love science, so armed with some good GCSE grades, I decided to sit for a Sixth Form scholarship at Cardiff Sixth Form College which has such an amazing reputation for academic results and for getting students into study top subjects such as medicine at leading universities.”

Buraq was awarded a 100% scholarship at Cardiff Sixth Form College and since then has not looked back.  He won the Independent School’s Association (528 schools) Lexden Award in July 2020 as the most outstanding student, completed an EQP comparing the US and UK medical systems, competed in the Oxford and Cambridge regional debates, been an active member of the student-led Medical Ethics Society and was Vice President of the NASA Space Settlement Design Team where he was chosen by Imperial College to represent the UK.  Buraq is also a keen Youth Scouts Leader, is part of the Welsh Government’s Youth Led Grant Panel to advise on the government’s charitable support and since lockdown set up, with three other Cardiff Sixth Form College students, Highwell Education – a free UCAS guidance service for local Welsh students, tutoring them in UKAT and BMAT university preparation.

“I have absolutely loved my time at Cardiff Sixth Form College” said Buraq.  “There are some really amazing students here from all over the world who are not only bright but have so many other talents in music, sport and art.  I have made lifelong friends, met people with similar interests, been allowed to develop projects and received enormous support from the teaching, careers and admin staff. It is a brilliant community and I will certainly be coming back to help other students going forward – I am really grateful to them for everything they have helped me achieve.”

Said Principal of Cardiff Sixth Form College, Gareth Collier: “Buraq is an extraordinary student who out of adversity has really gone onto achieve great things.  It astounds me that despite the traumatic start to his life, continued separation from his parents and strong medication that he uses to manage his daily pain, Buraq does not allow himself to dwell on these difficulties.  Instead this has made him resilient, determined to succeed and embrace every opportunity that has been available at the College.  He has been an inspiration tutoring younger students, been an outstanding School Prefect, undertaken impressive work experience programmes and masterclasses and fully deserves both his grades and place at Cambridge.  Our NHS needs people like Buraq and I am truly delighted for him.”