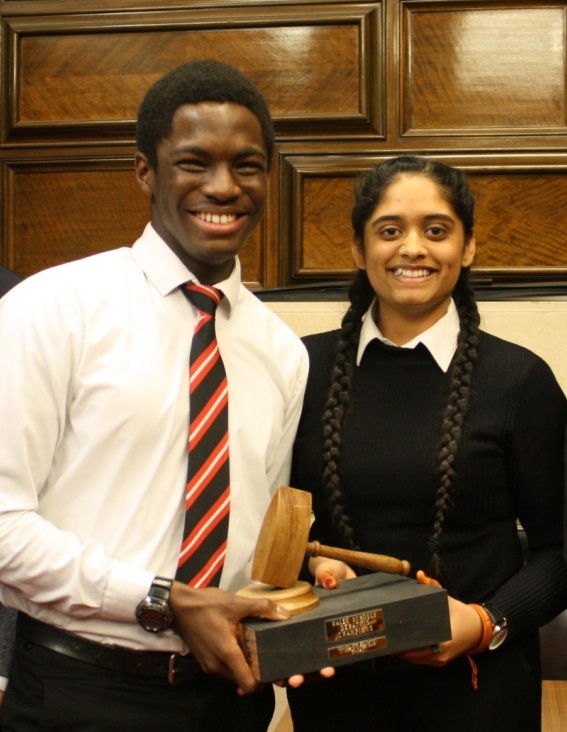 We are very proud to announce that two Cardiff Sixth Form College students have been selected to join Team Wales at the 2017 World Debating Championships in Bali, Indonesia in August.

The world’s most prestigious debating competition, the World Debating Championships is run by the English Speaking Union and features some of the most skilled orators and thinkers of our students’ generation.

AS-level Nigerian student, Odunayo (Odu) Salu and AS-level Indian student, Havi Sabarigirivasan were informed that they had made it onto Team Wales at the end of January, after selectors from the English Speaking Union were impressed by their ability to create and present complex arguments in a compelling manner.

In forming Team Wales, Odu and Havi will be joined by three students from UWC Atlantic College in the Vale of Glamorgan.

To prepare for the Championships, the students will be required to attend training sessions on weekends and during college holidays and Team Wales coach, Mr. George Clay, will work closely with them to ensure that this doesn’t interfere with their exams or university applications.

However, this is not the first time that Odu and Havi have been successful in the many debating competitions that CSFC has taken part in. In fact, since they joined CSFC’s Debating Club at the beginning of the 2016/17 academic year, they have won almost every single competition they have taken part in.

Last month, Odu and Havi were announced as one of two teams of CSFC students selected for Finals Day of the Oxford University Schools’ Debating Competition.

In addition, in October of last year they won the Regional Heats of the Wales Schools Debating Championships held at CSFC, before going on to win the Quarter and Semi-Finals of the competition in Newtown in November, and the Grand Final in Cardiff in December.

Speaking about how she felt when she discovered she had been chosen for Team Wales, Havi said, “It’s a big honour and we never thought that it would happen, because we only started debating this year.”

Meanwhile, Odu told us about how his debating experiences will help him in applying to university and in his future career:

“When you’re debating, you may have a few notes written down which you can glance at, but your brain has to start working and thinking at the same time as you are speaking. It will be the same in interviews; they will present us with a problem or question and expect us to come up with a solution or answer, and they will also want us to talk about the logical progression of how we came to our decision. This is something that debating helps you to do really well.”

We would like to take this opportunity to congratulate Odu and Havi on their achievements in the Debating Club to-date, and to wish them good luck for the Championships in Bali in August!

Picture opposite shows Odu and Havi receiving their award at the Wales Schools’ Debating Championships Finals.