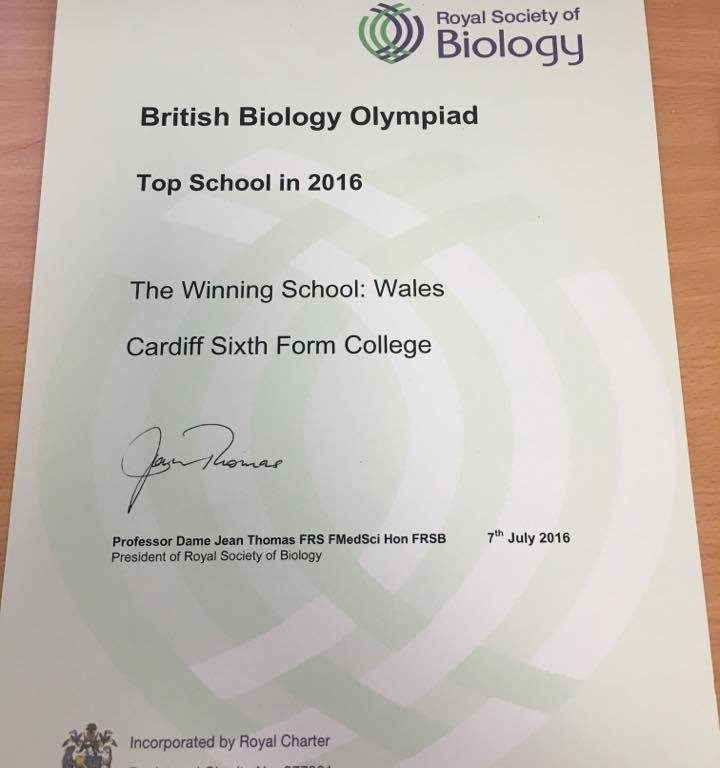 Cardiff Sixth Form College is delighted to announce that it was named the Top School in Wales in the 2016 British Biology Olympiad, for the third consecutive year.

Organised by the Royal Society of Biology, the British Biology Olympiad challenges and engages students passionate about Biology to maximise their talents, by enabling them to demonstrate, and be suitably recognised and rewarded for, their knowledge and understanding of Biology. The contest includes two one-hour multiple choice tests, to be completed online under supervised examination conditions.

Of the 40 CSFC students that undertook the 2017 British Biology Olympiad in January of this year, an astounding 11 students achieved the Gold award (for scores of 61+); only awarded to 6% of the 7,500 UK students who undertook the exam.

Of these 11 students, five were eligible to go through to the next round, where they would be given the opportunity to be selected for the UK team. These students were Molly Ruengpirasiri, Marcus Ho, Katie Law, Valentyna Chernova and Somkiat Phutinart.

In addition, eight CSFC students managed to attain a Silver award (for scores of 55+), including Emma Davis, Queena Lee, Jason Bennett, Viann Chui, Helen lawe, Javid Alizida, Jessie Kan and Seren Jones. All students who have been awarded Bronze, Silver or Gold are invited to attend an awards ceremony in July at the Institute for Engineering and Technology.

Well done to all students who undertook the British Biology Olympiad!