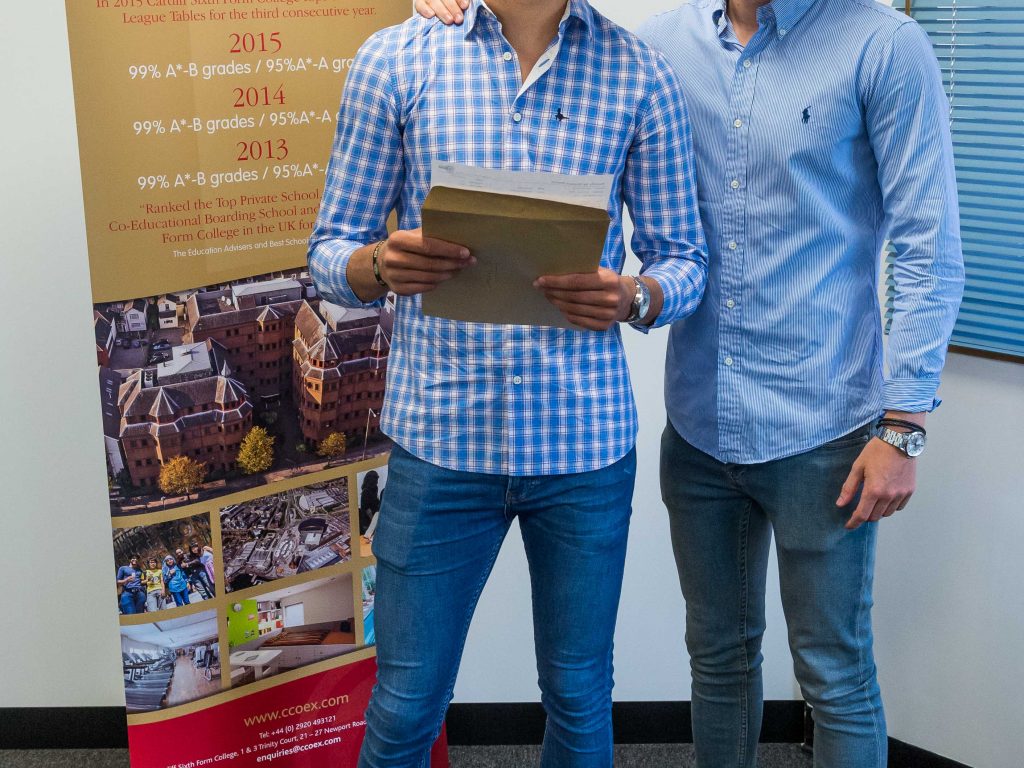 Elation, excitement and emotion; just some of the words that could be used to describe the scene at Cardiff Sixth Form College today as students celebrate the release of their A-Level results.

One student, Kam Hong (Linus) Cheung, from Hong Kong, managed to secure an astounding total of 5 A*s and 2 As.

Again this year, our students will be going on to attend an impressive range of universities; 21 students hold offers from the University of Cambridge, 17 from University College London (UCL), 15 from London School of Economics and Political Science (LSE), 13 from Imperial College London and 4 from Warwick University. Between them, they will be joining some of the most competitive courses including Medicine, Dentistry, Engineering, Law, Economics and PPE.

Amongst these students, Samuel Cross will be going on to study Medicine at Imperial College London, after achieving 2 A*s and one A grade. He will be following in the footsteps of his brother, Jacob Cross, who graduated from CSFC in 2013 with three A grades (both Samuel and Jacob are pictured opposite).

In addition, Singaporean student Zi Qi Kok will be heading to Cambridge University to study Medicine after achieving an astonishing 5 A* grades, while Danel Medelbekova from Kazakhstan will be off to Imperial College London to study Biomedical Sciences after also achieving 5 A* grades.

“I’d like to congratulate all of the students at Cardiff Sixth Form College on a fantastic set of results yet again this year. It’s been a real pleasure to see them progress throughout their time here and to go on to achieve such excellent results. Our students will be going on to attend a wonderful range of universities. For me, it’s a real pleasure to work at Cardiff Sixth Form College which, once again is proving itself to be right at the very pinnacle of premier A-Level education in the United Kingdom.”

Cardiff Sixth Form College would like to congratulate all of its students on their results and to wish them the very best of success in their future careers.