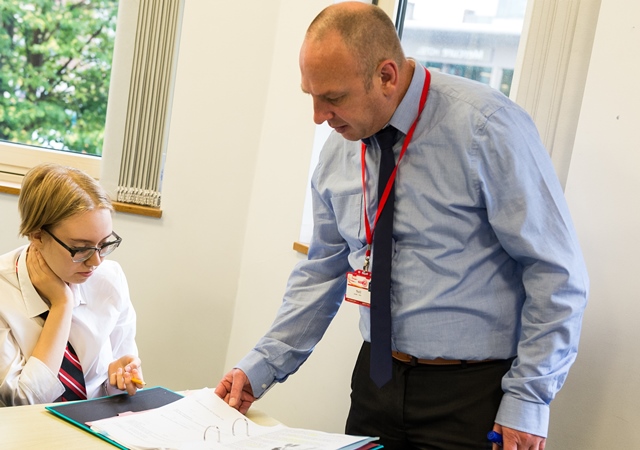 From the 20-25th July, a team from Cardiff Sixth Form College went to teach the Oxbridge Preparation Programme to Hong Kong students who might be considering studying in the UK. The team included Mrs Sue Clements, (English/IELTS Teacher) Gwyn Williams (IELTS and Critical Thinking Teacher) and Dr Liam Hughes (Principal) all of whom had made the trip last year and delivered a similarly successful programme.

Like the previous year, the event was organised by Britannia who had recruited close to sixty students for the event. It took place at La Salle School and all the team were made most welcome by the Principal, Brother Steve Hogan. Their new Hall which had recently been refurbished was made available for the event and it proved a very pleasant venue to conduct the Seminar. Apart from Britannia’s team helping things run smoothly, Brother Steve was always on hand to ensure that the sound system was working. Alumnus, Carlos Li (Econs., LSE), formerly from La Salle and latterly from Cardiff Sixth Form College, his brother Felix, currently at CSFC, and Marco Wong (Law) came to visit and help out.

The students, who attended the programme were highly motivated and rose to the challenge of a different kind of educational experience. They were not only introduced to the ideas that underpin education in the UK but were able to experience some of the processes of that education. While inevitably there had to be some knowledge input and theory, it was fundamentally only scaffolding for the interactive, process part of the development of skills. Thus, students learned what critical was theoretically, but more importantly perhaps, they practised the art of thinking critically themselves. So the course focused on the kinds of thinking that is not rehearsed, nor coached – the kind of thinking that needs to be learned by doing it. This, it was argued, is the kind of thinking required by questions in Oxbridge and other interview situations where what they are assessing is our way of thinking and reasoning, that is, how we think rather than what we think. By doing interviews, by working in groups, tackling problems such as building a bridge or solving a murder using clues; students began to appreciate what teamwork requires, what being interviewed feels like and so on.

Effective communication was a leitmotiv of the course and again students learned this by attempting it. Sometimes this involved presentation of ideas, or trying to convince their peers or allowing themselves to be persuaded of the wisdom of what a member of their group was saying. Students became acquainted with some of the tests that will be relevant to their courses later on, such as, BMAT, LNAT and TSA – and were able to attempt some of the questions and get feedback. Many enjoyed wrestling with the beginnings of their Personal Statements and gaining an insight where gaps exist which will need to be filled in later in their studies.

Those students interested in studying medicine in the future were exposed to some ethical issues and possible approaches to what are open-ended and relatively intractable problems. They were also able to observe a mock medical interview with student Carly Mak, which was quite instructive and gave a platform for some of the braver students to have a go at being interviewed in such a public arena.

Friday arrived and a successful week was rounded off by the presentation of Certificates to all the very deserving students who had participated so willingly throughout the week. All that remained were the expression of the debts of thanks to the alumni who had helped, the organisers who had provided invaluable help and made the event possible and of course our genial host Brother Steve at La Salle.