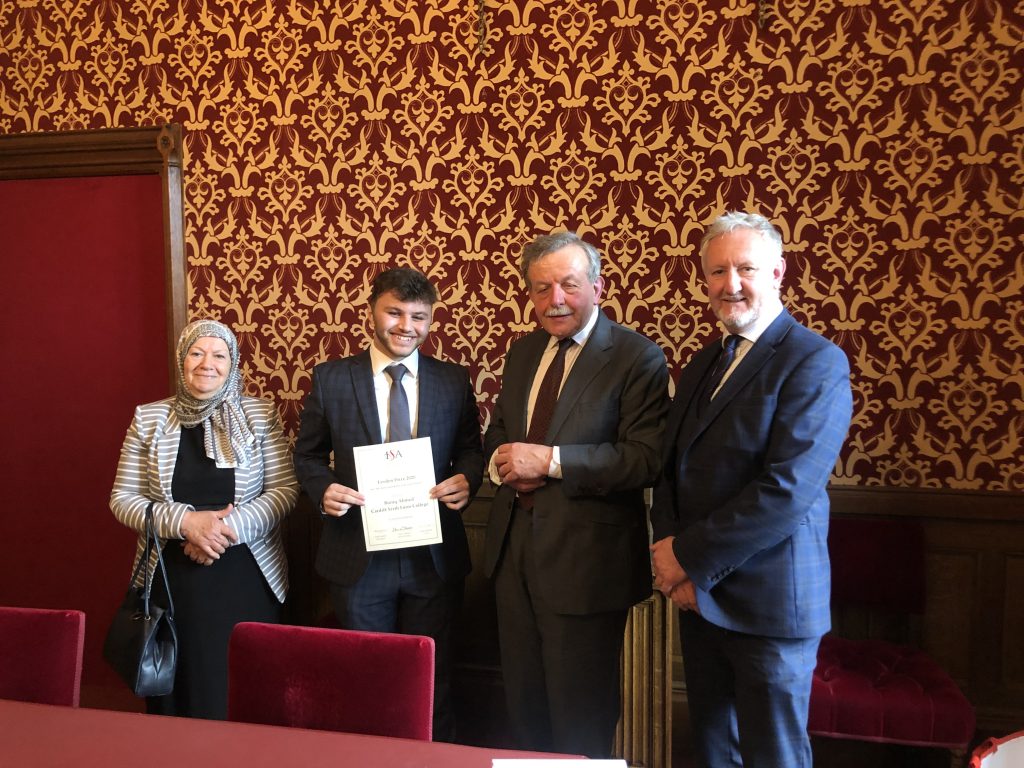 It was an honour and a privilege to be able to accompany Buraq to the House of Lords and witness him receiving ‘The Lexden Award’, presented by Lord Lexden himself and sponsored by the ISA (Independent Schools’ Association). The occasion was made more significant as the prize winners for 2020 and 2021 were all in attendance, having been delayed because of restrictions placed on the event by Covid. An illuminating session witnessing ‘Question Time’ in the House of Lords, facilitated and compered by Lord Lexden before afternoon tea with the Speaker and other representatives of the house, preceded the prize giving ceremony. It was a splendid occasion and entirely appropriate for the high quality of recipients for both the Lexden and Whitbread Awards.

Buraq, currently studying medicine at Cambridge University, graduated from Cardiff Sixth Form College in 2020 and has thoroughly enjoyed the transition to university, though the demands and requirements of his course are high. Buraq was named as the final winner of the Lexden Award from a very large field of high quality applicants and is recognised for his high academic achievement and for overcoming a number of significant obstacles in order to achieve the high standards that he has set himself. Arriving in the UK from Iraq as a medical refugee, he has demonstrated the highest levels of motivation and resilience and was a significant contributor to life at CSFC through the prefect body and the NASA SSDC club which he led. He was accompanied on the day by his grandmother, who has been his companion throughout his time in the UK and the occasion was a clearly a huge honour for both. Buraq says of the award, “I am extremely thankful for being recognised by the ISA in this way and to Lord Lexden for all that he does to support students in independent schools. I would also like to thank my teachers at CSFC and most of all my family for the support that they have given me in being able to undertake the amazing journey so far.”

The Lexden Award is presented annually to the ‘Most remarkable Sixth Form student’ at an ISA school: