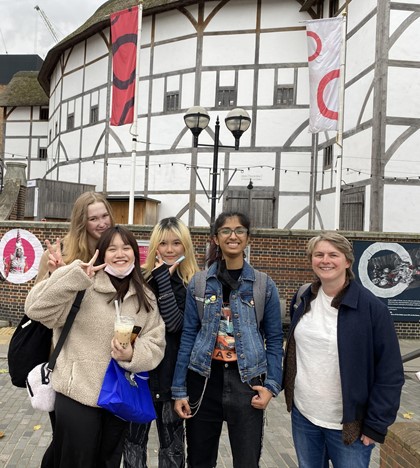 Recently the A2 English Literature class took a train to London to immerse ourselves in a day of Shakespearean entertainment.

Exploring the Southbank and the back streets of Southwark allowed us to see the London that audiences from the 1600s would have known. We enjoyed the sights and sounds of Borough market, still held in the shadow of Southwark cathedral where Shakespeare would have worshipped, though he probably didn’t visit the amazing Bao Bun stall which we sniffed out for lunch! A stroll along the Thames path took us to The Globe, a replica of the Elizabethan theatre where Shakespeare’s plays would have been first performed. And then, without further procrastination, it was on to the main event – a performance of Hamlet.

The Young Vic production sold out in record time when first announced but COVID delayed the production for 18 months, meaning that Cush Jumbo, the first woman of colour to take the lead in a major staging of the play, has been waiting like Hamlet for the right moment to act. This was a Hamlet constantly conscious of his loss, the minimal set design (three reflective gold pillars) and naturalistic delivery (Hamlet even broke into a rap), intensified the focus on the actors and their interactions. It has given us much to discuss and provided new ways to view some of the characters.