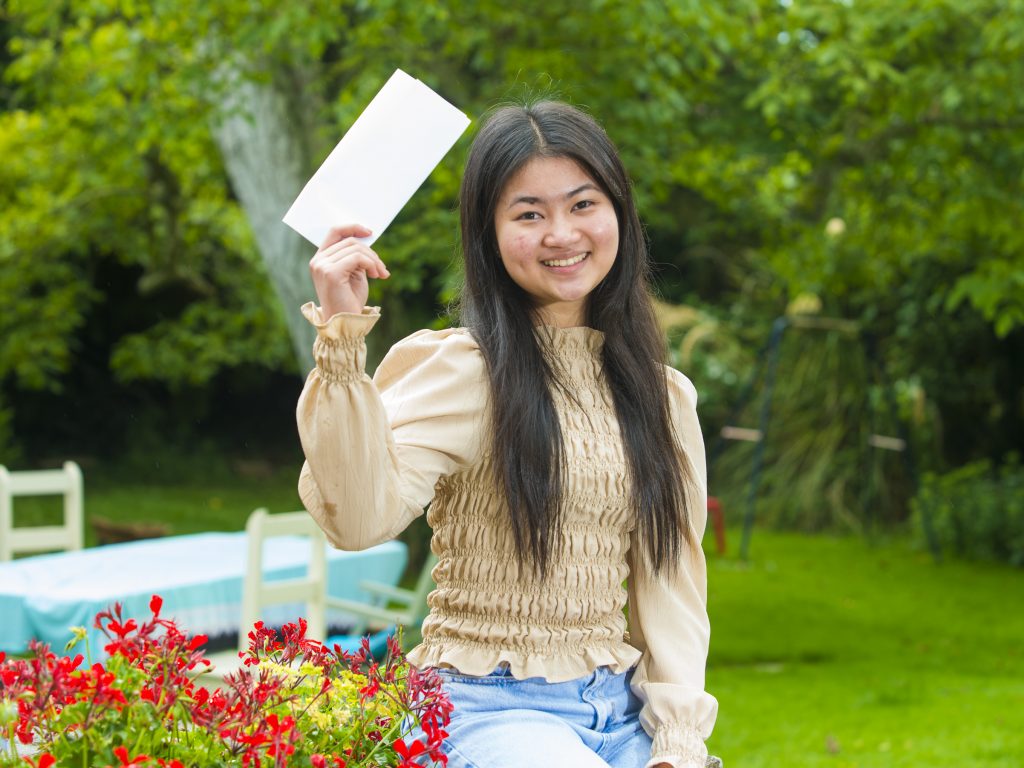 A teenager from Cambodia who was rushed into hospital during her GCSEs with a heart infection, has managed to achieve four 9s (Biology, Chemistry, Mathematics and Physics), one 8 (English Language in which she was awarded Distinction) and one 7 (Art and Design) in one year.

Chhiv Gech Long (15), who is from Phnom Penh, joined Cardiff Sixth Form College on a one year GCSE course last September and suddenly felt ill in February when she was rushed into ICU at Cardiff Children’s Hospital.  She made a remarkable recovery as fortunately her symptoms were not familial or ongoing and was back in class three weeks later.

“The staff at Cardiff Sixth Form College and my guardian Kate, were amazing” said Gech.  “Obviously it was a pretty worrying time for my parents back in Cambodia but they were in daily communication whilst I was in hospital with the school and I cannot thank the pastoral team enough.”

Gech, who wants to study to be doctor, was such a hit at the hospital that they have offered her work experience whilst she studies for her A Levels in Cardiff.

“I think my time in hospital has really made me want to study medicine even more” said Gech.  “The staff there were so kind and professional and they do such an amazing job, I found it really inspiring.”

As well as studying hard for her GCSEs, Gech has been involved with the Medical Society at Cardiff Sixth Form College, has helped to set up the school’s video club – CSFC Productions – as well as getting involved in the many House competitions.

“One of the competitions I was involved with was to design a menu for the whole school so I designed a Cambodian menu which won top prize!  I worked with the catering team to put my menu on as a special ‘Dining Experience’ and was really pleased that everyone enjoyed eating Cambodian food” said Gech.

Unable to get home due to the pandemic, Gech has been spending the summer with a family in Axbridge near Somerset where she has enjoyed the stunning Somerset countryside and planning parties with the family.

“I obviously miss my family but I have had a great summer and cannot wait to get back to Cardiff Sixth Form College at the end of August” said Gech.  “I really love my school and everyone there is so warm and friendly and have really helped me not only with my studies but also making me feel welcome.  I have lots of friends and have been really involved with all the activities that have been taking place the school, it really feels like my home from home.”

Principal of Cardiff Sixth Form College, Gareth Collier commented: “We have so enjoyed Gech being with us at Cardiff Sixth Form College.  She has not only worked extremely hard, especially on her English, but has been a really positive member of the community.  The pastoral team have been outstanding in their care and support of her during a fairly worrying time and the teachers have gone out of their way to help her catch up.  We were all so pleased that she recovered so quickly.”