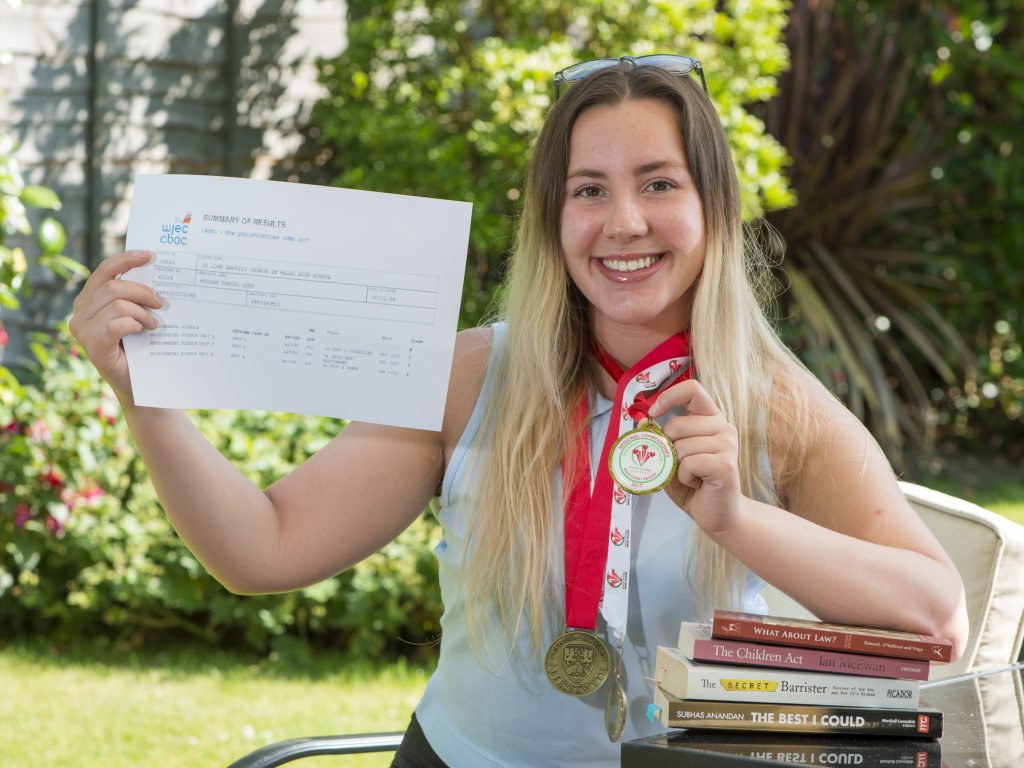 A former Welsh competitive swimmer, Georgina Withers-Boalch from Cardiff, has won a place to study law at University College London after gaining four A*s in Biology, History, Maths and Chemistry at A level.

Georgina, who was in the Welsh Swimming Squad, was told by her doctors that she needed to quit swimming and was on four medications a day.  She discovered she had an under-developed larynx, was allergic to chlorine and was finding it difficult to breathe.  However, for Georgina, swimming was her life.

“At first I thought I had asthma as I had a very bad cough, was really chesty and my sinuses were playing up and when I was racing I was literally gasping for air” she said.  “However I was swimming nine times a week at that point and am very determined and competitive so I didn’t want to give up.  What really broke me was that my swimming coach, who really kept me going with my training and whom I saw twice a day, just didn’t turn up one session as he tragically died from a heart attack. This affected me really badly as we were very close.”

Georgina decided to focus on her studies achieving 14 A*s at GCSEs and won a scholarship to top school, Cardiff Sixth Form College.

“I felt I had reached my limit in my previous school and wanted to really challenge myself for my A Levels. I saw the documentary about Cardiff Sixth Form College and used to drive past it in the street on the way to swimming so came to an open day and was fortunate enough to win a scholarship.  It was a real awakening being surrounded by such bright students who were so committed in their studies and I struggled in History, particularly at first, as the writing style at A Level is a real step up from GCSEs.

“Having attended a History trip where we visited the Old Bailey and watched cases I had my heart set on being a criminal barrister and bought several books and read up about the Crown Prosecution Service.  I also attended mock trials whilst at Cardiff Sixth Form College, have taken some online law courses and studied Jurisprudence and the foundations of law.  One element I really enjoyed was doing the EPQ and researched ‘To What Extent Should the Insanity Defence be reviewed in the UK’.  This law has not been amended since 1843 and there is real controversy over this which I found fascinating.”

Georgina, who was also a member of the debating team and took part in European Youth Parliament where she won several competitions.

“My mum had breast cancer when I was 11 and she has been working as a physio technician for the NHS so has been really busy during Covid19.  Both my parents joke that they don’t know where my brains have come from!  I am just so pleased I have a place at UCL and can make my parents proud.”

Gareth Collier, Principal of Cardiff Sixth Form College said: “Georgina has worked really hard for her grades and deserves her success.  She has been an active member of the College community and has been very supportive to other students.  She has a keen and decisive mind and will make an excellent barrister.”