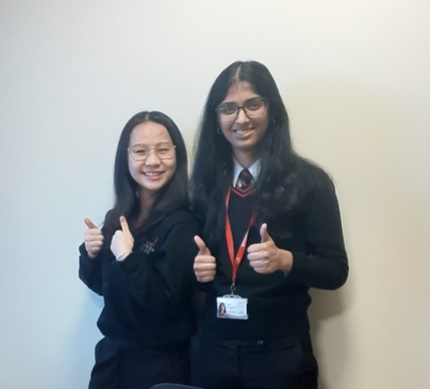 Congratulation to Sylvana and Maha for winning the finals of the Wales Schools Debating Championship, the semi-finals and finals of which took place last week.

The national competition is open to all students in Wales aged 14-18. Each secondary school/college can enter one team of 2 students and 1 student in the individual competition.

The motion for the finals, which they had to oppose was: “This house believes that it is legitimate for citizens to break the law in order to tackle systematic oppression”.  The judges said that this round saw the highest quality of debating in the competition.  They were praised for their excellent knowledge of current affairs.

We must also issue our congratulations to Zaynab who competed in the Individual Debate final on the same day.

Odu and Havi were our last Wales debating champions in 2017, well done to Sylvana and Maha for continuing Cardiff Sixth Form Colleges’ success in the competition.