Are GCSEs the route to Oxford University? 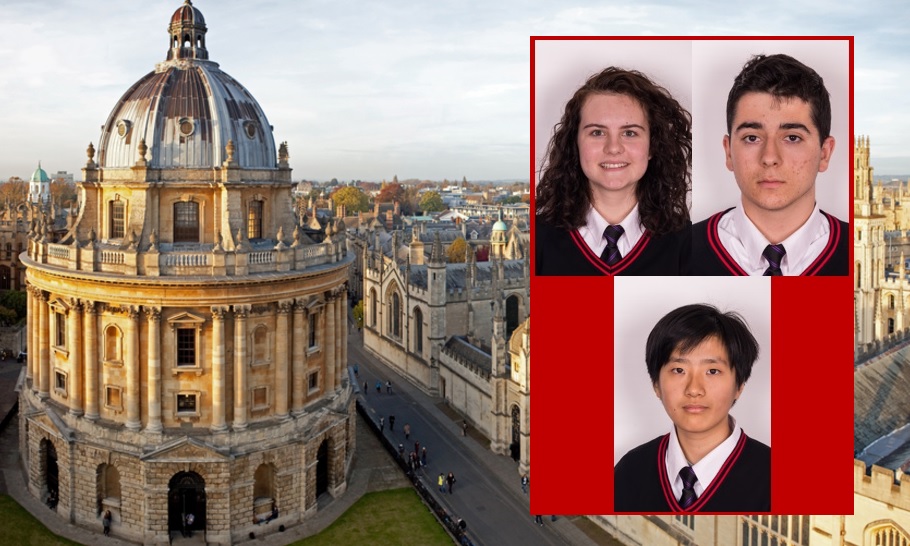 Three Cardiff students, David (Spain), Sandy (China) and Ellie (UK), have just received offers from the University of Oxford for September 2021.  The two international students both joined Cardiff for the College’s one year GCSE course.

It has been historically difficult for international students purely studying A Levels in the UK to gain offers at Oxford University as the university takes into account GCSE grades when making offers.  Therefore, despite 2021 being a very competitive year for entry due to many students deferring their offers from 2020 due to Covid19, does doing GCSEs in the UK make a difference to Oxford University offering places for international students?

Said Head Higher Education at Cardiff Sixth Form College, Hayley Bendle: “With Oxford University, previous qualifications and admissions tests have been the evidence that the university has used to make its offers. Oxford certainly looks at concrete evidence and due to the uncertainty with centre assessed grades in 2020 and 2021, previous qualifications sat in non-Covid times are even more important.  In addition, a candidate must achieve their minimum predicted grades as well as good marks in their GCSEs or equivalent qualifications.”

Director of Marketing and Admissions, Henrietta Lightwood has also been examining the data: “Here at Cardiff Sixth Form College we only started running our one year GCSE course three years ago and there is no doubt that looking at our alumni destinations over previous years we had more students going to Cambridge rather than Oxford.  Some of this may be due to the courses that our students were applying for such as medicine, engineering, natural sciences and law where Cambridge does well in the league tables. However international students’ lack of solid GCSE qualifications has no doubt also had an impact. International students who are looking in particular at courses such as PPE, English Language and Literature, modern languages and geography where Oxford is ranked as number one or who have Oxbridge aspirations should certainly therefore consider coming a year earlier to study their GCSEs in the UK.”

The numbers of GCSEs sat have also been cited as a measure Oxford looks for when making offers for entrance.  Added Hayley Bendle: “There has been a myth abounding that students who get offers for Oxford University need to have 13 A*s at GCSE level. However, Oxford states that it is open to everyone whatever their background.  Both our international students who received offers for Oxford this year had taken our one year GCSE course where they take six GCSEs in one year so this certainly disproves that theory.”

Both Oxford and Cambridge have announced that they will be making less offers due to the uncertainty over the reliability of centre assessed grades this summer as exams are set to be graded generously, meaning A Levels are set for a second year of major grade inflation. Oxford disclosed that it made just 3,541 offers for 2021 entry which is down 9% from 3,889 last year. However, the university has increased the number of offers made to black, Asian and minority ethnic students which is encouraging news for international students.

David, from Valencia in Spain, joined Cardiff Sixth Form College’s one year GCSE programme before staying on at the number one college in the UK to complete his A Levels in chemistry, biology, maths and physics. David has just received an offer to study Medicine at Oxford University.

Said David: “When I saw that I had an offer from Oxford I was so happy I shouted, as I have been wanting to go there ever since I was 11 years old” he said.  “My parents actually cried they were so pleased for me and they know how hard I have worked for this.”

David made the decision to study at Cardiff Sixth Form College within two days of his receiving an offer as he was really convinced that with the College’s reputation for helping students deliver excellent academic results and their strong progression into top universities, it was the place to help him realise his dreams. And he hasn’t been disappointed.

“Starting with GCSE was a really good way for me to improve my English and academic skills ready to study A Levels” he said.  “It is a completely different system to Spain where you study lots more subjects but in less depth and I read around all my subjects so that I had a really good grasp of the subject matter.  I have also changed from thinking I would study maths at university to studying medicine and I had lots of people at the College helping guide me.  I dropped further maths at the end of my AS year and started biology which was tough as I had to study very hard during the summer to catch up but was thrilled to get 100 UMS score in my mock exams in September so it was all worth it.”

David thinks the secret to his getting an offer from Oxford to study medicine was the passion he showed for the subject as he truly believes medicine to be a vocation and wants to work in the National Health Service.

“Even before I decided on medicine as a career I was an active volunteer and worked every Saturday for three hours at a local care home for the elderly.  I wanted to do it and to help people and it really made me realise that I wanted to be with people and not working inside a laboratory or in isolation.  I bought books on medicine, took part in online courses, all with the support of the wonderful careers teachers at Cardiff Sixth Form College, I studied nutrition, obesity and disease transmission – it was fascinating.  The more I read the more passionate about the subject I got and a career in medicine is certainly not something you should go into if you don’t enjoy it as the hours are long and the pay is not astronomical.”

David attended four interviews for his place at Oxford and has felt that his critical thinking lessons at Cardiff have really helped him as Oxford interviews do not follow a formula but are intended to challenge.

“In my first interview we discussed how I would reorganise the NHS with 40,000 new students coming to join next year.  We also discussed ethical questions such as should the NHS pay for surgery for boxers and I had scientific interviews designed to see how I think and would go about problem solving.  I actually didn’t prepare hugely because I knew they were going to ask me about subjects I didn’t know much about, so I just made some bullet points.  Also I am fortunate to have strong skills in terms of meeting new people, being confident and a good communicator.

“At A Level I really enjoyed studying chemistry and biology as they are very interactive and enable me to use my initiative.  They are subjects you can visualise and learning how the human body works, and its complexities in order for it to function with intricate patterns and behaviours, I found fascinating.  I also loved being part of the GLEE Club at Cardiff and was a member of the cast of Grease where I played a Dad!  I am a prefect and the community officer and helped organise the Amongst Us Night – a kind of game about imposters for the boarding community, was involved with Christmas card projects and also took part in the NASA Space Settlement Design Competition.

“However perhaps my favourite extra-curricular hobby is cooking and I do a lot of this and cook for my friends in the boarding house.  I find it both creative and very relaxing and we are lucky we have small kitchens in our rooms which is great.  I also try to do sport every day to keep fit and even in lockdown have created programmes experimenting with my body weight and go for walks and runs in some of the local parks.

“The UK is a great place to come to school – it is very easy to live here and I have met some fantastic people from all over the world and been taught by some really amazing teachers – they just need to keep doing what they are doing!  It is an experience I will remember for the rest of my life and I really wouldn’t change it for anything and highly recommend other students to come.  Work hard and experience life – it is a really rewarding journey.”

Ellie received an offer to read Law at Mansfield College.  A day student from Pontypridd studying English Literature, French and History, Ellie is also a member of the college debating society.  Before joining Cardiff Sixth Form College in the sixth form, Ellie attended Bishop of Llandaff school in Cardiff.  She said:

“I genuinely feel really elated and really glad that all my hard work paid off!  My teachers have been so supportive and invested in my application which I really appreciate.  I feel like Oxford will open a lot of doors for me in my future career so this is a really fantastic opportunity.”

Sandy, who is from China, joined Cardiff’s one year GCSE course and is now going to read Philosophy, Politics and Economics at the University of Oxford.  This is the third year Sandy has been at Cardiff where she is currently studying A Levels in Chemistry, History, Economics and Further Mathematics.