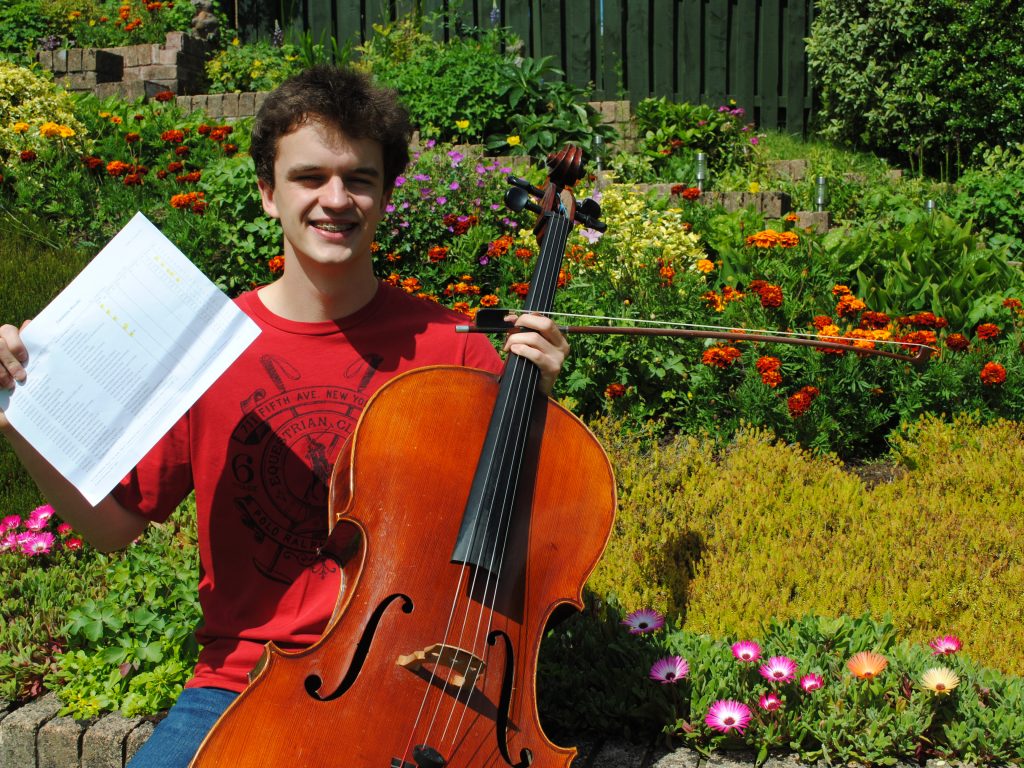 Outstanding cellist and scholar, Paul Dugdale, has won a place to study History and Economics at Balliol College Oxford having achieved A* in History, A* in Economics A* in Maths and A* in Further Maths in his A Level results announced today.

One of the most talented and accomplished Economics and History students Cardiff Sixth Form College has ever seen, Paul left a local school in Newport to join the UK’s top performing institution on a 100% scholarship.

Paul, an accomplished cellist, grew up in a musical family as his mother is a music teacher who is very supportive of his playing.  He achieved his DipABRSM Cello Diploma when he was just 14.  Formerly the youngest member of the National Youth Orchestra of Wales and Great Britain respectively, Paul now plays in several semi-professional orchestras around the region and has taken part in the Youth Proms at the Royal Albert Hall on several occasions.

“My Sixth Form years have been the best of my life so far. I loved the fact that there were people from all around the world and was excited to learn about different cultures and viewpoints – it has certainly made me more open minded and better prepared before going to university.” said Paul.  “I was having a bad day at my previous school and decided I wanted to study in an environment where there were more like-minded people.  I googled the ‘best academic institution in South Wales’, found it was Cardiff Sixth Form College and signed up for the scholarship exams the same night – it was that simple!  I found Maths a bit hard to begin with but the whole set up at College was so supportive; surrounded by talented, bright students who were all really eager to learn and supported by fantastic teaching staff, I soon started to make rapid progress.”

Paul found he had a natural ability in Economics, despite never having studied it before, and has particularly enjoyed studying the historical context of Economics, conflicting ideologies and how these factors influence current economic thinking and policy. He has furthered these interests in Debate competitions while at Cardiff Sixth Form College representing the College at numerous events including the European Youth Parliament National Finals where he evaluated Sustainable Development policies.

Events like these also allowed Paul to hone his leadership skills, which were put to good use in his role as Head Boy this year. “Being Head Boy has taught me a lot about managing teams, being organised and the importance of good relationships” said Paul.  “It can be very tricky getting a group of teenagers to all work together sometimes but organising social events, putting together our Yearbook in ‘lockdown’ and organising the whole year group’s hoodies has actually been really fun.  Since teaching has finished, I’ve had time to help in my father’s allotment, practise my cello, start reading for university as well as completing my Head Boy duties.”

Said Cardiff Sixth Form Principal, Gareth Collier: “Paul has made an excellent leader of the school and is excellent at helping more reticent students voice their opinions.  He and one of his friends from Hong Kong, also a Diploma level cellist, have performed both within and outside school on many occasions and have really inspired some of our other students to form musical groups and perform as well.  Both his History and Economics teachers have commented that Paul is easily one of the most gifted students they have taught and we were all delighted when Oxford recognised his enormous talents – it is precisely the right university for someone of Paul’s calibre who thinks critically, is highly academic and analytical and is able to arrive at well-substantiated judgements.  I can see him in the Civil Service on a fast-track programme, advising the government on the environment and sustainable development in the future as he has read so much about these topics at school.”