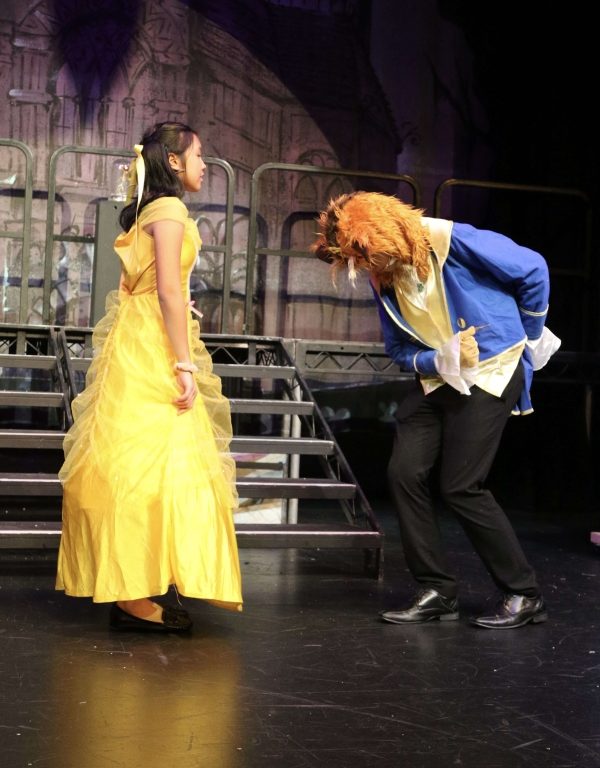 Last weekend, Cardiff Sixth Form College’s annual production took place – Beauty and the Beast, an age old tale of two unlikely lovers learning to love one another. Our students put in phenomenal performances to transform the college into a mysterious castle for two nights. Both the crew and cast put in a massive effort which saw the University of South Wales’ Atrium building full to the brim for both performance days.

Director Kris Crowley says of the Glee club that ‘it has been an absolute pleasure working alongside the committed, enthusiastic, talented students of CSFC on this production. The amount of work, planning and organisation that goes into creating a production of this ilk is impossible without such a strong team.’

The extraordinary talents of our students appear to know no bounds; whether it be the Cultural Event, Eisteddfod or Sports Day the students excel no matter what the challenge and drama performances can clearly be added to this ever-extending list after last week’s incredible performances.

For those who are unfamiliar with the fairy tale written by French novelist Gabrielle-Suzanne Barbot de Villeneuve, the play centres around a vibrant and intelligent young woman, Belle, (played by Laetisha Witoyo and Rachel Yo) who aspires for something more in her life. With her father (played by David Suarez Garcia) imprisoned in a mysterious castle hidden in the forest, Belle’s heroic rescue of him leads to her capture by the Beast (played by Joshua Low), a terrifying and temperamental monster, who was long ago trapped in his gruesome form by an enchantress (played by Julia Min) for his ignorance. The only way for the Beast to become human again is if he learns to love and be loved in return. However, once the magical rose loses all of its petals, all hope will be lost and he will stay a Beast forever. The Beast’s enchanted household (played by Arianne Banks, Aviral Batra, Husna Sanusi, Claire Chan, Wesley Teo) watch anxiously as Belle and the Beast grow to understand and befriend one another. Their feelings grow ever deeper as the clock ticks and petals continue to fall – will they confess their love for one another before it is too late?

The Glee Club students are a credit to the college and we can’t wait to see what next year’s performance brings!