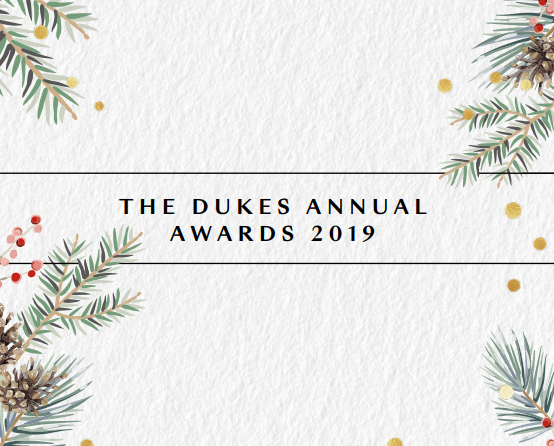 As we are approaching Christmas it’s time for the annual Dukes Awards Ceremony which takes place in London this Friday the 13th.

Gethin Thomas, Head of Boarding, has been recognised in the ‘Charitable or Community’ award for the many charitable efforts he’s made for the college. Most recently his altruism has led him to spending a night in jail! For doing so he raised over £1,300 for the Velindre Cancer Centre. Let’s hope that prison didn’t indeed change him.

Hayley Bendle, Head of Careers, has had a noticeable positive impact on the mental and physical wellbeing of our students. Hayley will be recognised for her hard work by being nominated under the ‘Innovative Educational Practices’ award, she said of her nomination: “I am delighted and humbled to have been nominated by fellow Cardiff Sixth Form College staff for the Innovative Educational Practices award. Outstanding careers education is something which I am truly passionate about, especially supporting our students in their employability beyond CSFC. The CSFC Careers Award enables students to be professionally-ready for any future applications for internships and work placements as soon as they arrive at university. I see CSFC as not only the place where students achieve excellent A Levels and top world-wide university destinations, but as a fundamental launch pad to highly successful careers later in life.”

Hannah Parkinson, Alumni Coordinator, has been nominated for ‘Marketing Initiative of the Year’. Hannah has worked hard in creating an Alumni Association for CSFC, a place for past and present students to engage, share career opportunities, mentor students, find work experience and obtain UCAS support. Hannah said: “Working on this project for the past year has been a labour of love, we have a long way to go but are off to a great start.”

Cardiff Sixth Form College has also been shortlisted for the ‘Marketing Initiative of the Year’ for the work we have been doing in the department through a college-wide rebrand. This has taken a great deal of work with a combined effort from Olivia Haywood, Director of Brand, Henrietta Lightwood, the Director of Sales and Admissions, and the Marketing Executives, Nathan Llewellyn and Rhys Andrew. On the nomination Henrietta said: “I am absolutely delighted that the new re-branding at Cardiff Sixth Form College has been shortlisted for the Dukes Marketing Awards. The project has been a real team effort between the Cardiff marketing team and Dukes Head Office and has been extremely well supported by all our stakeholders who have been real supporters of the new brand. The marketing team has worked really hard to help the roll out and our agents internationally have been very positive about the change.”

Neil Davies has been nominated for the ‘Staff Member of the Year’ award which goes to a member of staff chosen from all the Dukes colleges who have demonstrated exceptional performance and achieved positive development outcomes for both students and colleagues. Neil has led the one-year GCSE course through implementation, design, and inspection to the top of the Telegraph Small Independent Schools’ League Table. On top of his teaching schedule, Neil has been adding exciting enrichment opportunities on evenings, weekends, and even holidays.

Nigel Hanbury has been nominated for the ‘Service Above and Beyond’ award. What Nigel has done for the Physics department is huge. He eats, sleeps and breathes his subject and gives his time, dedication and skills to the college without expecting thanks. He’s even completed the astounding ‘longest Physics lesson on record’ over a 24-hour period for charity last year. Additionally, he volunteers his own time on a Sunday to give two to four hours of extra Physics support. Nigel also donates his IT skills to the pastoral team through the design of the back office tracking database for CSFC’s award winning CREATE portfolio.

Cardiff Sixth Form College has also been nominated for ‘Overall Organisation of the Year’ which is a fantastic achievement and a credit to everyone involved with our college. Just to blow our own trumpet a bit, this year we have continued to achieve outstanding results at AS and A level with the addition of our brand-new GCSE programme. With this we have topped the Telegraph Small Independent Schools’ League Table and been named “Best Independent Secondary School in Wales” in the Sunday Times Parent Power rankings.