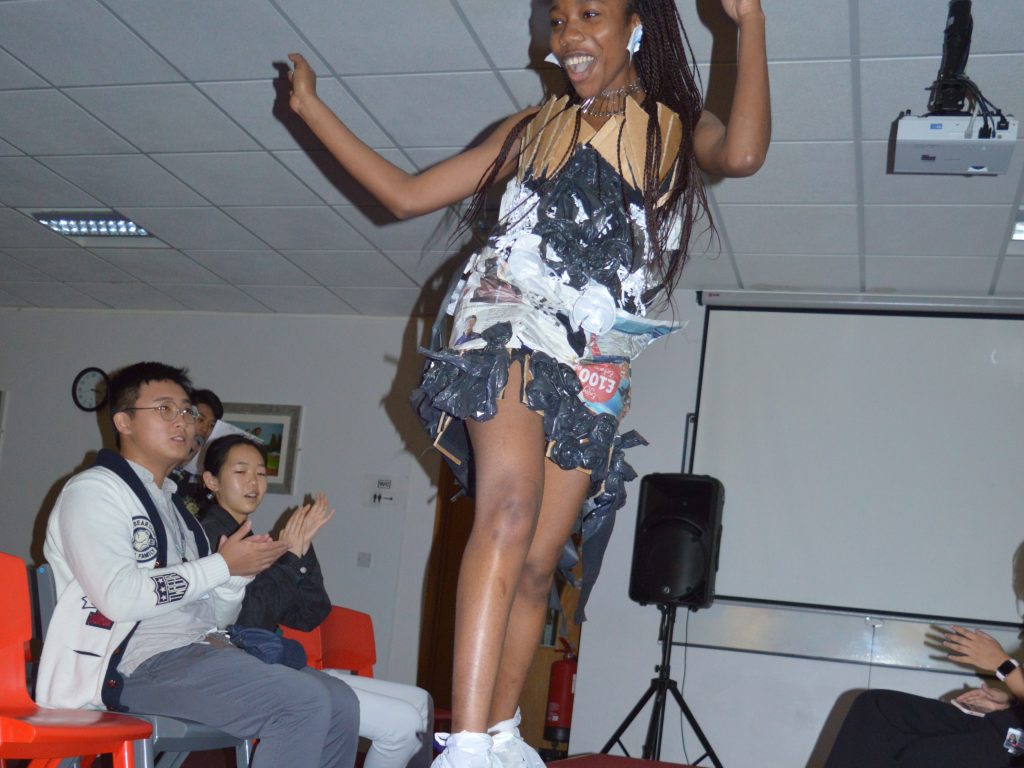 Cardiff Sixth Form College students recently took part in their own Fashion Show with themes including Animals, Decades (ranging from the ‘20s to the ‘80s) and ‘Trashion’ (making fashion pieces out of recycled goods).

Each of the 7 Houses had two outfits for each theme and they were made by several student designers throughout the day. The event was judged by Mr Thomas (several jokes were made about him being old fashioned), Usman and a few Houseparent’s. The catwalk was a fantastic display of fun and fashion with music and cheering from the crowd who came to support their House.

Cardiff Sixth Form College student Kinda shared her first-hand experience of the show with us:

“Participating in the fashion show was a very memorable experience. I arrived on the Sunday with a few ideas that we would use for the competition and I was glad to have had such helpful and creative people in my house to help me out.

For the theme ‘Trashion’, designers from Franklin: Angel, Emma and our model, Jessie all worked together to make a fan-inspired dress.

Another category was Decades and we were given the 1920s. At first there was some confusion on how we would go about it but after a few discussions with the design team we agreed that we would try to show off what high-class woman in those days would dress like.

The surprise section of the fashion show, which was revealed on the day, turned out to be Animals and luckily we had lights we used to make our Franklin firefly and wings made from cardboard boxes. While one of my teammates, Julia X, volunteered to be the second animal which was a fox, she did her make up beautifully and the rest of the team helped make her costume

Finally, it was time for the fashion show and we had managed to put together six outfits in 3 hours. Anxious, we all went to the hall and when the show started all we could do was hope and make sure our outfits and poses dazzle the judges.

We were all ecstatic and proud of our achievement and I didn’t think it would have happened if not for the great team work. Also, as much as it was fun to win, we had fun in the process and it was a day that I will always remember”.

Congratulations to the winning team Franklin and joint second place going to Seacole and Rubin. You all looked tremendous.