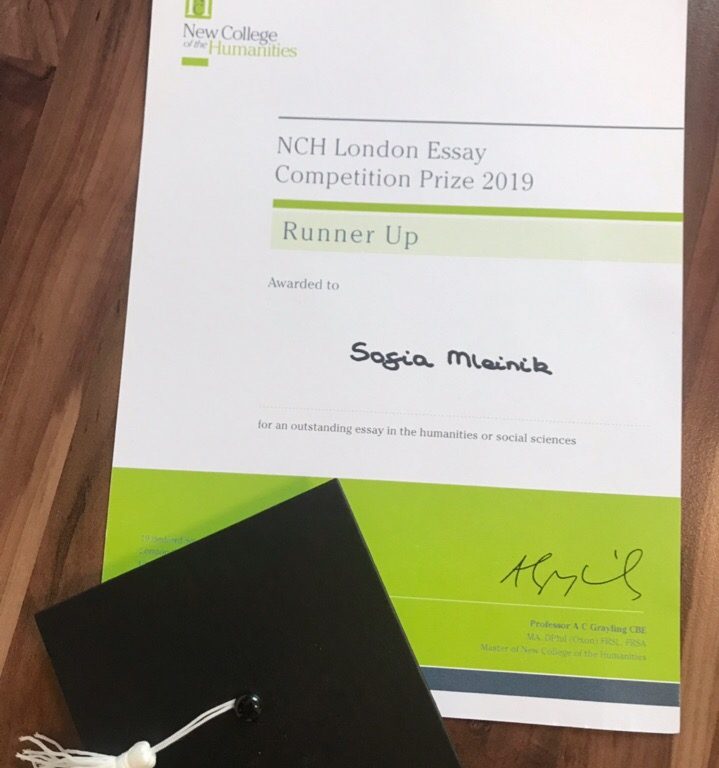 To put this into context, there were 3,600 entries into this year’s competition, so it is an incredible achievement for Sofia to have won a prize.

On Tuesday 25th June 2019, New College of the Humanities (NCH) announced the winners of the 2019 NCH London Essay Competition at a special award ceremony in London.

Held in Bedford Square Gardens, the award ceremony was hosted by Professor A C Grayling, Master of the College, alongside the College’s academic faculty and students. 150 highly commended high school essay writers and their guests enjoyed being VIPs at our red carpet event and had their pictures taken by our NCH paparazzi.

Prizes were awarded in all the seven major subjects taught at undergraduate level at the College. In each category, the First prize was £1,000, the first runner-up was £500, the second runner-up was £250, and a third runner up was awarded a £40 voucher. Everyone who was highly commended received a £20 voucher.

Professor Grayling said, “The College received 3,600 entries into this year’s essay competition, and 150 students were shortlisted and invited to this award ceremony. To be in the top 4% of essayists is exceptional. Every individual who has been shortlisted deserves to be very proud of their academic achievement.”

Now in its third year, the NCH London Essay Competition was founded to inspire and encourage students from around the world who are in their penultimate year of secondary education and have a passion for the humanities and social sciences, to pursue their interest in these subjects and to further develop their critical thinking and writing skills.

This year’s competition sought submissions of essays in a range of questions as follows: