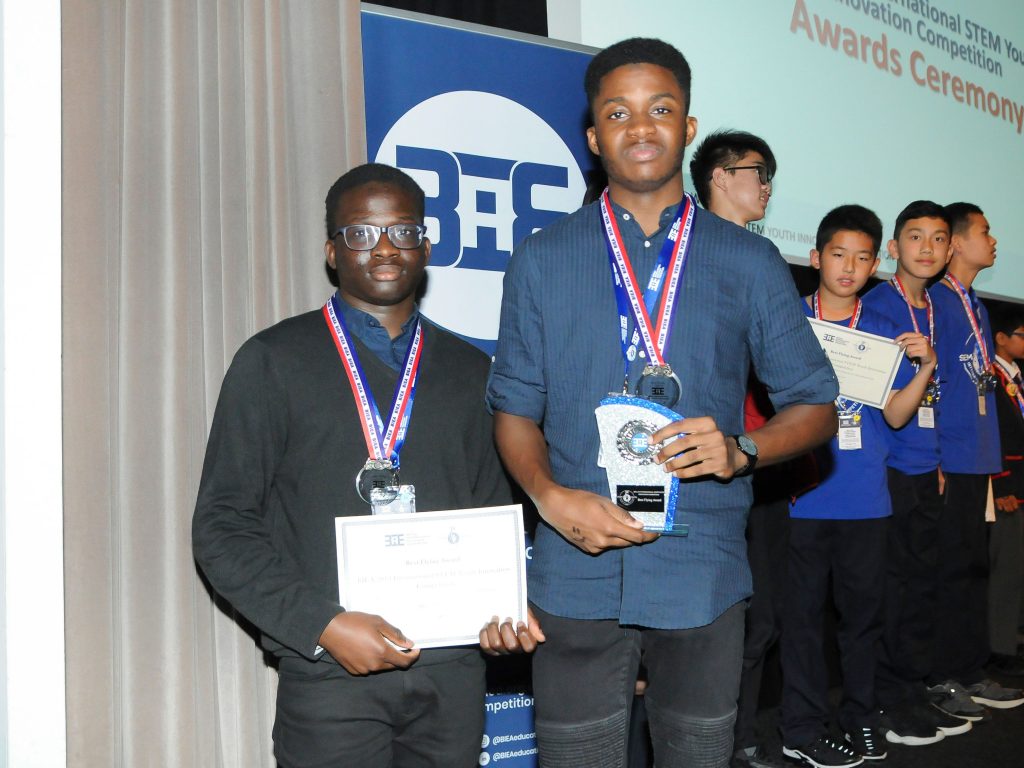 Students from the Cardiff Sixth Form College have won an award at the prestigious BIEA STEM competition in London. The event, run by the British International Education Association, was held in the incredible Royal Air Force Museum and was attended by invited teams from all over the world.

Tasked with providing a solution, using modern drone technology, to combat the endangerment of species in the wild, the students, Tanisha Kramer, Kinda Otieno, Shaakir Elelu and Abdullahi Ja’afar worked diligently over the course of a few months to compile a comprehensive report. Their creative thinking, engineering ideas and scientific report writing were rewarded with a place in the next round of the competition where they were provided with a budget to purchase and modify a drone.  Having done this and filmed themselves presenting their ideas as well as flying their bespoke drone, they were selected to be invited to the finals day in London.

Unfortunately, Tanisha and Kinda could not attend the final’s day and so the College were represented at the finals by Shaakir and Abdullahi. The standard at the final was incredibly high with extremely talented, young budding scientists and engineers from all over the world competing for the grand prize.

The first round involved Shaakir and Abdullahi creating a display that detailed how their ideas could be used to monitor elephant populations in the wild using drones. Following a grilling from the judges on their display the students then presented to a panel of experts and answered a barrage of questions. The final task was to put the theory into practice and pilot a drone through an obstacle course whilst taking photos to demonstrate the practicality of using drones in this way. The drone was skilfully flown by Shaakir whilst Abdullahi served as his navigator as much of the course was obscured from the view of the pilot. In this element of the competition, team work and communication were key to the success of the team.

At the awards ceremony there was a huge amount of praise and commendation from the judges as to the quality and innovation of the competitors as a whole. Whilst the Cardiff Sixth Form team were disappointed to miss out on the overall prize there was much celebration when they received the award for the Best Flying in the 16 – 18 age group – apt recognition for their efforts in the competition.

READ MORE about the competition.