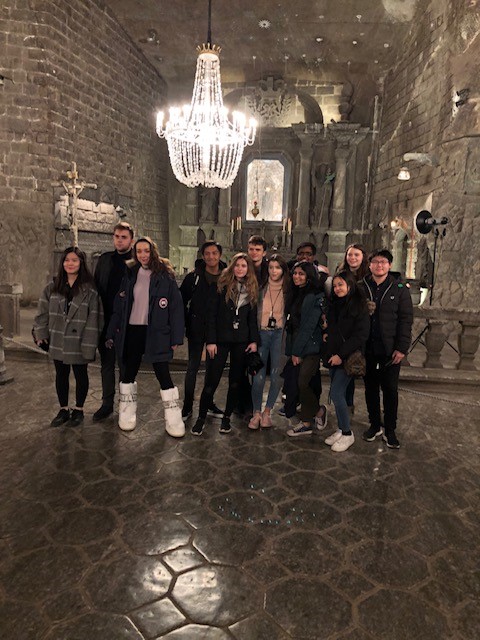 Tuesday was largely spent travelling as we had an indirect flight via Amsterdam. After settling into our hostel, a stone’s throw away from the main square in Krakow, we had a group meal in a lovely Italian restaurant. There was a little time afterwards for some exploring of Krakow old town before retiring to our beds as we had an early start the next day.

On Wednesday, we visited the concentration camp Auschwitz. Following the Nazi invasion of Poland in September 1939, Oświęcim was incorporated into the domains of the Third Reich. The town’s name was changed to Auschwitz and it became the largest concentration and death camp. Auschwitz-Birkenau was truly emotive and thought provoking. The students were a credit to the college in terms of their maturity and they asked the guide extremely perceptive questions. We then visited the Wieliczka Salt Mine, a UNESCO site.

We had a guided tour of the Galicia Museum on Thursday morning; this is a private museum which celebrates the Jewish culture of Galicia and poignantly commemorates the victims of the Holocaust. After lunch, students embarked upon a self-guided walking tour of Krakow which introduced them to sites of interest (e.g. Krakow Castle). We travelled home on Friday, arriving back at the college by mid-afternoon.