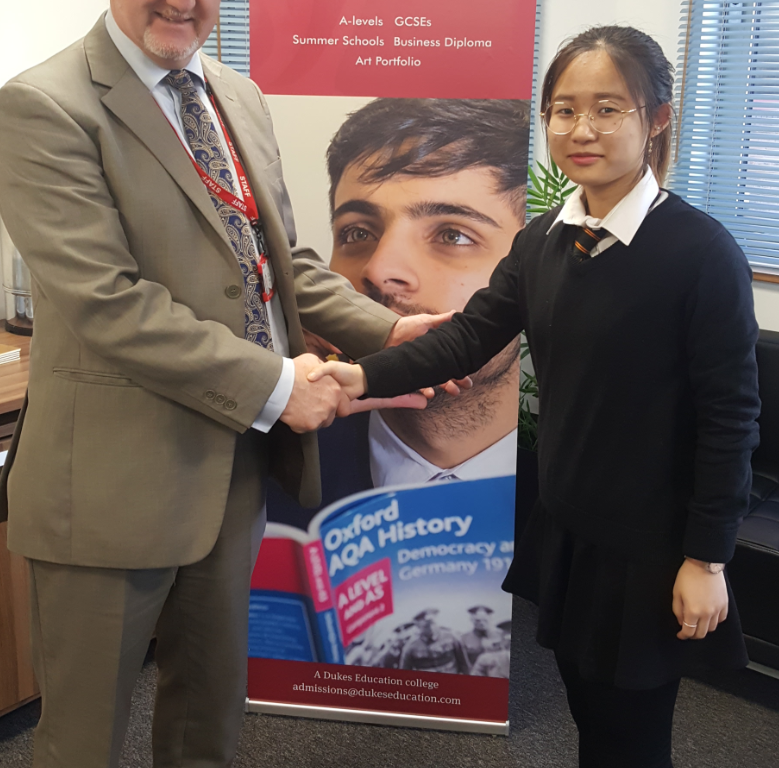 Cardiff Sixth Form College student Liuliu Li (Lavonda), who came to the college from Hangzhou New Oriental, is privileged to have been awarded a Cambridge Trust scholarship for entry in 2019. She intends to study Chemical Engineering through Natural Sciences and has an offer of a place with Magdalene College.

The Cambridge Trust offers scholarships for undergraduate students who pay the University composition fee and funding for international students with financial need is highly competitive. Lavonda’s award is a substantial one and recognizes her exceptionally high academic standard.

The only way to apply for the Cambridge Trust scholarship is to be nominated by your chosen college. Magdalene were clearly very impressed by Lavonda and put her name forward after her admission interviews.

The eligibility requirements for part-cost scholarships are:

Lavonda’s interviews focused heavily on her academic subjects and her ability to apply her knowledge of these to real world chemical engineering problems. She says of the process:

“I was really pleased that I had prepared so well for the application questions and that I had had so much interview preparation whilst at Cardiff Sixth Form College. The interviews were intense but everyone was helpful that I spoke to. When I didn’t understand the question fully, they gave me hints and helped me to succeed. Being able to take these hints and move my answer forward to a successful conclusion was what the interviewers were really looking for.”

Having also applied for a Jardine scholarship and having made it to the final round of interviews in Hong Kong, Lavonda was really disappointed not to be selected as a Jardine Scholar. On the day that the Jardine rejection letter came she says that she was ‘heart-broken’ as the scholarship would have meant so much to her and to her family, but then a second letter arrived on the same day offering her the place at Cambridge University for Chemical Engineering and she went from being ‘heartbroken’ to being ‘overjoyed’. Likewise, she says that her family are very proud of her and relieved that she has been recognized as such a high achieving student worthy of a scholarship.

Having received 10 offers from Top 100 World Universities, with potentially more in the pipeline, Lavonda is clearly very much in demand and Cambridge University, through the award of the scholarship recognize the value that she will add to the institution.

Speaking about Lavonda’s achievement, Mr Collier, The Principal says, “Lavonda is an exceptionally talented student, who will no doubt have a very bright future in Chemical Engineering. She has shown much resilience during her time at Cardiff Sixth Form College and receiving the Cambridge Trust Award is a well-deserved honour.”