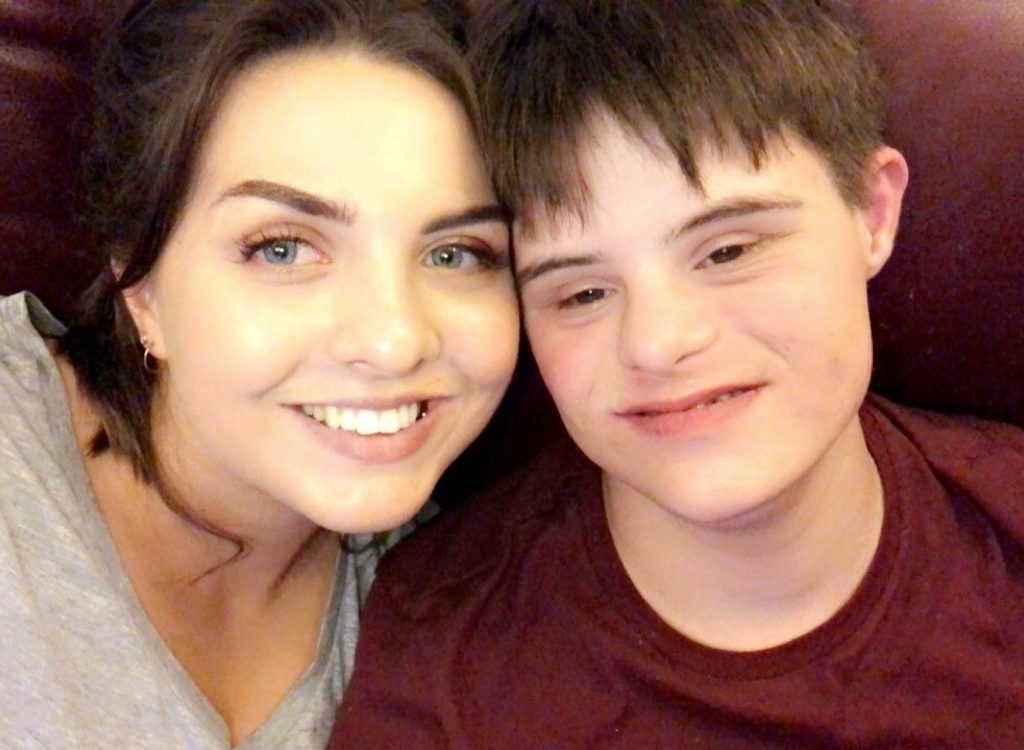 Claire Williams (19) from Bridgend, who helps care for her younger brother, Matthew (17), who is on the autistic spectrum and has Down’s syndrome, is the first in her immediate family to go to university.  Claire, who is deaf, and re-sat her first year of A-Levels and has gone against the odds by gaining an A* in Chemistry, A* in Biology and A in Maths which gives her a place to study Medicine at Leicester University.

Claire has experienced first-hand the benefit of the National Health Service when attending many hospital appointments with her brother and being actively involved in a caring role.

Said Claire: “My brother is very independent and attends Heronsbridge Special School in Bridgend and we have a very special bond and often use sign language to communicate.  He has directly influenced my decision to study medicine.”

Claire herself has conductive hearing loss having suffered with Glue Ear as a child.  This eventually led to a bone being eroded in her ear and she now wears a hearing aid permanently which she found very difficult to deal with at the beginning of her studies.

“It has been a lifelong ambition of mine to become a doctor and help people who have undergone trauma in their lives,” she said.  “As well as looking after my brother I have worked as a healthcare assistant at Hafod in Bridgend where I learnt a lot about manual handling skills and have seen first- hand how much we need good healthcare professionals here in Wales.  I was also involved with a fantastic work placement scheme organised by my school, Cardiff Sixth Form College, in Malaysia for two weeks last summer where I was fortunate to see surgical operations including an ear operation in quite difficult conditions. During work experience at Cardiff Spire Hospital I saw a vasectomy on the first day as well as a hysterectomy and both hip and shoulder replacements.  The adrenaline rush was incredible and has made me really determined to succeed.”

Claire gained a scholarship at league table topping Cardiff Sixth Form College from her comprehensive school in Bridgend, however had a difficult first year so decided to re-take.  She achieved UMS scores of 99 and 100% in her AS modules in Chemistry, Biology and Maths and is delighted to have achieved the results she needs for her place at first-choice, Leicester.

“It was a very difficult decision to start again especially when people were advising me not to and, although I was one of the academic students in my previous school, at Cardiff Sixth Form College I was surrounded by some very clever and ambitious students, many of which wanted to be Medics,” she said.  “However, that decision was the best one I have made as it enabled me to focus on what I really wanted to do and my teachers and family were so supportive and helped me enormously.

“I am under no illusions how hard the seven-year training will be, especially as I am interested in specialising in plastic surgery and reconstruction which will be life-long learning.  However, I am used to working hard and long hours.  My journey to school by train every day is nearly an hour, I often do my homework on the train and then help care for my brother when I come home as well as doing part-time jobs as a barmaid and waitress over the summer to earn some much needed cash!”

Cardiff Sixth Form Principal, Gareth Collier, agrees: “We are enormously proud of Claire who has shown real resilience and dedication – she is a real role model.  When Claire first came to Cardiff Sixth Form College she needed a lot of guidance and support and the staff here have been marvellous.  However, we could really see her potential and wanted to help her succeed.  Claire has been involved with the College’s Medical and Ethical Society and was awarded the role of Wellbeing Officer, helping some of our overseas students who were suffering from homesickness.  The empathy she showed, her personal experiences as well as her excellent organisational and leadership skills have given her a maturity well beyond her years.  We need young people like Claire to come back to Wales and give the National Health Service the valuable support it needs.”